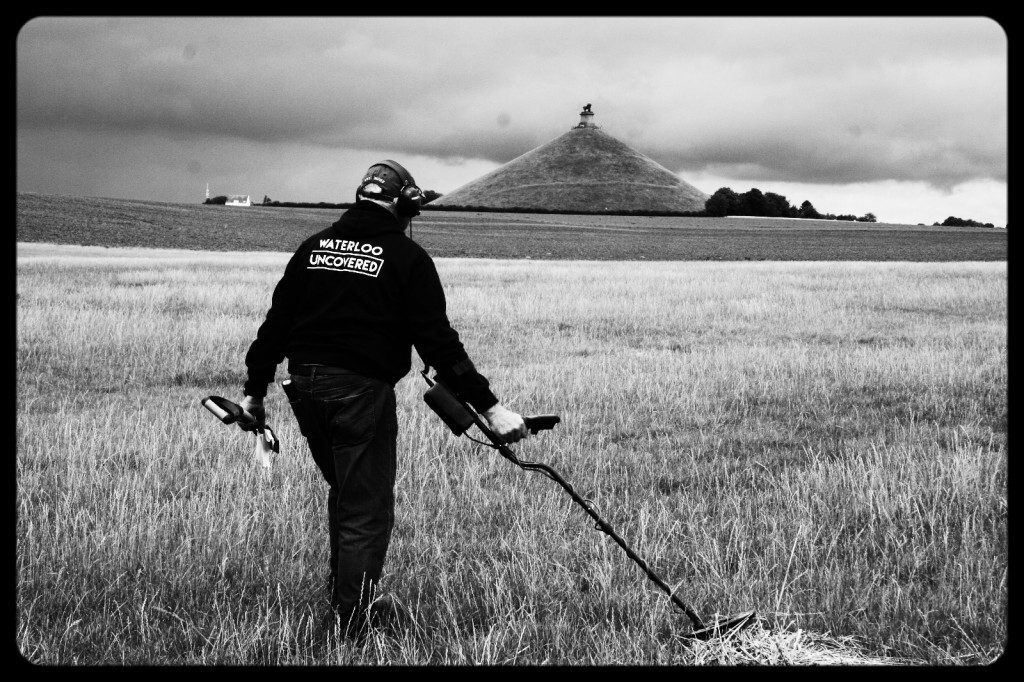 The countdown is over, we’re finally here at Hougoumont Farm and it feels so good to back. What was instantly noticeable since our visit in April was the development of the farm complex, particularly the superb renovation of the Gardner’s House where our site ‘hut’ is based for the next two weeks. Well done Project Hougoumont for such a fantastic renovation, the Wifi is making our lives so much easier!

So what did we achieve on Day 1? Well, a great deal it has to be said. With the Waterloo 200 celebrations only a few weeks ago it was inevitable we were going to encounter some left overs from the 5000 + re‐enactors who camped at Hougoumont in June.  An array of buttons, coins and a pair glasses were zapped by the metal detectors on the battle field and are in themselves opening up interesting questions and insights. For example:

With the very generous loan of a JCB digger Lead archaeologist of Waterloo Uncovered, Dominique Bousquet from SPW,  Emily Glass, site supervisor and the team of wounded veterans began excavating trench 11, situated in the walled garden . The purpose of this trench was to explore ground truth anomalies that the geopyhsics team from the University of Ghent had picked up in April. The anomalies turned out to be natural post glacial features. However, it still yielded a French musket ball that had been fired and undoubtedly hit a target. What or who received the blow we’ll never know but hit it did as shown by its flattened bottom.

Over in the Great Orchard a large scattering of musket balls are showing an interesting pattern of French and allied ammunition.

Find of the day 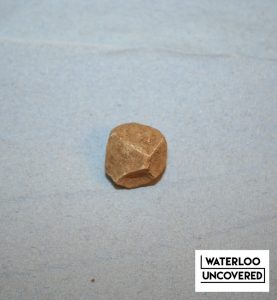 The first piece of cannon shot found at Hougoumont

However the most exciting find came in a small package:  a small piece of lead cannon shot.  This is the first piece of cannon ammunition to be found at Hougoumont  and may relate to a French Howitzer, a small artillery piece, which is recorded in eye witness accounts. This one small piece of lead has added to the sum of our knowledge of the Battle and its only day 1!

The mood amongst the team after day 1 was buoyant and with further explorations going on in the walled garden and the “killing ground” throughout the week, stay tuned for many more discoveries and light bulb moments.

Want to hear more about the project? Take a look at our youtube videos here.